On June 1st, I drempt I saw the Lord roaming about under a house, underground. He was in hiding. The Hansen boys, Arie and then Ezra, saw the Lord and were awe struck over seeing him with their eyes aglow.

The Lord Jesus then moved on and under the house where he was hiding, the house began to leak from above and the Lord started getting dripped upon from the water coming down from the house. He then moved around to avoid getting wet. 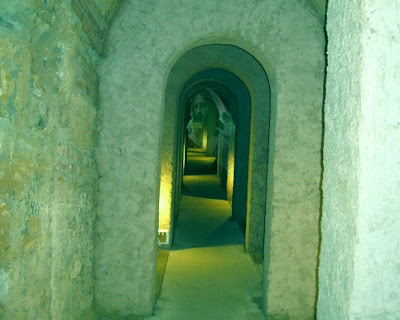 That is when a woman appeared clothed in red and very modestly dressed with also a head covering. Her long cloak was the color blood red and she and the Lord conversed. The Lord said something close to this "It is not time yet, for the Father has not yet finished preparing the message." That is when the woman said to the Lord close to this, "regardless I will follow you wherever you go" and so the woman was steadfast in her following the Lord and she moved about as the Lord was moving in the underground areas, while also working something with her hands.

Interpretation - While this may not seem like an extraordinary dream, the Lord is speaking to his church about how the house, the church, is going to have to move underground where he is and because of the floods of trouble coming, the church, if it is to move with the Lord, is going to have to be mobile underground as well, to avoid the troubles coming.

The two boys who saw the Lord Jesus and who's eyes were aglow when seeing Jesus, live in a rural land in community with others. They are already in the underground church by the way they are living and moving toward living, off the land and pursuing some off the grid living. So too, the church will need to move from above to below and begin to live in community if they are to see the Lord and move where he is.

The Woman clothed in red is the church underground. Her cloak, and head covering were all the color of blood red, signifying she is covered in the blood of Jesus. Christians will need to move about underground soon if they want to follow the Lord wither so ever he goes, to the hidden place, underground, even at the time of the flood of trials coming to the church above ground, who will suffer greatly soon if they don't get underground where the Lord is and is moving.

The message not yet given of the Father is a personal word for me for a specific mission, that he is preparing the message for me to deliver in its time, so I await and very soon, the Father will send me forth with that specific prophetic message, as well as others.

In the mean time, the Lord Jesus is preparing and moving his church underground, to avoid the flood of troubles coming. The Woman was working with her hands when with the Lord. We should be as the woman in blood red, moving about where ever the Lord goes so we may be preserved for continuing on with the work of the gospel to his coming, for when the troubles come, the floods will overwhelm that part of the church above who is not prepared to get underground and will not be busy about with the work of the gospel, like the underground church, but will be busy and consumed with their own sufferings at that time, instead of the work of the underground church, where the Lord is.

Father Yah, prepare us to move about wherever you are. We can do nothing eternal and lasting without you. Preserve us for the furthering of the work you've called us to do. May our hands be busy about preparing all you have for your bride clothed in your blood during the time of tribulation soon to hit. May we endure with one another hand in hand wither so ever you go, as we lay down our lives for one another in the power of your Holy Spirit agape love..... amen

Posted by Weather at 8:14 AM No comments: